When I originally wrote this post, I had hoped that my dog Tucker would be around for another few years, but it was not to be. He was diagnosed with a tumor on his liver in June, and gone by the beginning of August. It was a very smooth and peaceful transition, and even though he’s no longer physically with me, he still feels very present.

I often think about the lessons I learned from watching Tucker over the years. The last month of Tucker’s life brought home even more strongly the second lesson below, of being in the moment. Of course, Tucker wasn’t aware of his “diagnosis,” but even if he had been, I doubt he would have spent much time being upset about it. He would have relished the fact that it meant he could now eat whatever he wanted, for as long as he wanted to eat! As usual, he would have been fully in the present, not worrying about what was to come, but just enjoying what was happening now. That’s a good way to live, and although as a human it’s pretty hard to do that on a regular basis, I think it’s a great thing to aspire to, and I’m grateful to Tucker for reminding me.

I hope you enjoy this the second time around. 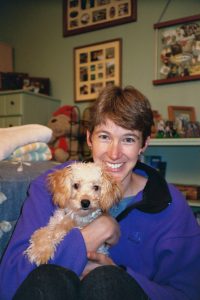 Our first day together.

It’s hard to believe, but my baby boy (for those of you who don’t know, that’s my miniature mountain attack poodle, Tucker) just turned 13! He’s doing well, with the exception of a little arthritis, and a good deal of hearing loss. That’s actually a bonus, because if he doesn’t hear the doorbell ring, he doesn’t bark. But he still gets super excited at all sorts of things, runs around like a puppy, chases after his toys, and his appetite is as healthy as ever. I’m hopeful we’ve got quite a few more years together, and I’m reflecting on all that I’ve gained by having Tucker in my life. As I’ve watched him through the years I’ve realized that, like a lot of other dogs, he’s got the right idea about how to go through life. Here are five lessons from Tucker:

There are many more things about Tucker that are worth emulating, and also plenty that aren’t (rolling in disgusting smelly stuff, anyone?). But I’m so grateful for everything Tucker has taught me, and especially grateful for his affection, his presence, his optimism, his action, and his tenacity – and how he reminds me to do the same. 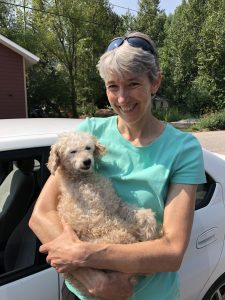 Our last day together.

« How Many Hops?
A Story About Perspective »