I’d like to share a story with you that is related to my summer work in the office of Exum Mountain Guides. It’s not about me, but about the guide service as a whole, and in particular, about Nat, one of the owners and the president of the company. For those of you who aren’t familiar with it, Exum Mountain Guides is one of the longest-running guide services in the country, and has been the official Grand Teton National Park climbing concessionaire since 1929.

The story started last summer, when the area in which we run our climbing schools was closed due to the potential of serious rockfall. It’s called Hidden Falls, because it’s next to a waterfall by that name, on the other side of Jenny Lake. In early November, the rock did fall on its own, and we were excited because that meant the park might let us start guiding in the area this summer.

However, the park bureaucracy moves very, very slowly. A proposal to use a new climbing area that Nat wrote and submitted last summer took almost an entire year to reach the superintendent’s desk and get approved. So even though the immediate danger was gone, there was no guarantee that we would get access anytime soon. 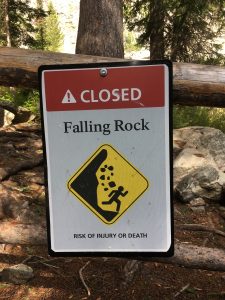 Once the snow melted in the spring and Nat could get over to survey the area, he was back at work creating yet another proposal. Given the time frame of the last one, it seemed highly unlikely that it would get approved in time for us to climb there this summer, but he had to try. And writing proposals is not a part of the job he enjoys – he’s first and foremost a guide, after all, even if he is now an owner.

After submitting it, Nat went from being certain that we wouldn’t get access to Hidden Falls this summer, to thinking it was 50/50 odds, to being cautiously hopeful – and back again, multiple times. The climbing rangers were fully in favor of the park reopening the area to us, arguing that if anyone was a good judge of safety, it was the Exum guides. After all, we had alerted the park to the danger in the first place! Our park concession representative also knew how important it was for us to return to the area, and was doing what he could. But as Nat put it, you’ve got geologic time and bureaucratic time, and in his experience, bureaucratic time is actually the slower of the two.

Amazingly, the park moved faster than either geologic or bureaucratic time, and after a request for even more information (which mean Nat had to write an additional proposal) – they said yes! We could use Hidden Falls! We were elated. Work still needed to be done to get a useable trail, but we’d cleared the biggest hurdle – getting permission from the bureaucrats. Or, so we thought.

After several days of hard work rerouting the trail so that it stayed clear of the debris field from the rockfall, Nat came back extremely discouraged. He had concluded that we could not safely access the climbing routes, either by our old trail, or the “new” trail they had been trying to clean up (which was actually an historic trail that had fallen out of use). There were still a few large rocks perched up high that threatened the new trail, and it involved some fairly steep, exposed slabs that were fine for guides but not for the average client. We couldn’t access the climbing area from above, because of the waterfall and the rushing creek. Nor could we reach it from the south side, unless we created an entirely new trail through the bushes, and that would require a whole new proposal and a trip back through the park bureaucracy.

Nat’s discouragement was palpable – he’d worked so hard on the proposals, had gotten permission in an impossibly short time frame, and we had thought it would be just a simple matter of clearing up a trail. Except it wasn’t. As Nat said, “It’s like Hidden Falls is an island – we can’t get to it. It’s surrounded by water, rockfall, and bureaucrats!”

And all of this was happening right as we were gearing up to start the season. The guides were returning, he was running our annual Guides’ Day meeting, our Guides’ Training, getting the gear ready, and taking care of one hundred other things that still needed to be done. He didn’t give up, though. He went to talk to the head climbing ranger, and the next day they went over to assess the situation. Nat hoped that Scott might be in a position to help him see or create some other alternatives.

And he was. Scott was able to give permission to create a hand line on the steep slabs that would make it accessible to clients, and use the rangers’ tools to remove the threatening rock that was still perched above. It still took almost another week to make all these things happen, but in the end, Nat succeeded in getting Hidden Falls reopened to us for climbing by the first week of July. 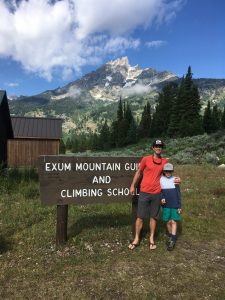 I find this story inspiring – and relevant to this coaching newsletter – because of all the places along the way where Nat either had to put his energy into things he didn’t particularly like doing (namely, writing proposals), and because of all the times when the likelihood of success (for getting access this summer, or maybe ever) seemed incredibly slim. Hopeless, even. But Nat didn’t give up. He continued to do what was within his control, and kept moving forward. It’s very much like when clients come to me feeling hopeless about finding a job that they enjoy. But when I can help them switch that mindset to one of moving forward, one step at a time, and not giving up even when it seems that nothing is going their way – it’s amazing the options that appear, and the job opportunities that come up for them.

This situation is also a reminder of how even seemingly massive change only happens as a result of tiny actions compounding over time. That rock had been there for decades, perfectly solid, except for a hairline crack running across it. But over the years, as small amounts of water kept freezing and melting, freezing and melting, eventually this rock the size of a house came crashing down. So even when we think we’re not seeing any results, we may need to just keep doing what we’re doing until we get to the tipping – or in this case, cracking – point.

And ultimately, Nat’s success at getting access to Hidden Falls was all about the relationships that he, and Exum as a whole, had built over time. If it hadn’t been for our long record of providing life-changing experiences to our clients, the rangers pushing for us to get access, or our park concession representative knowing how much it mattered, bureaucratic permission would easily have taken months to years. And were it not for the good relationship we have with the climbing rangers (Exum guides are frequently first on scene when there are mishaps in the mountains, and often help out on rescues), the trail obstacle may also have proven to be insurmountable. Just like with my clients when they are job searching, it so often ends up being the relationships that they already had, or reached out to create, that lead them to what they were seeking.

Of course, the truth is, you never know how things will turn out, no matter what you do. But when we just keep chipping away at the things that are in our control, and don’t give up, then magic often happens. And when it doesn’t, at least we can know that we’ve done everything we could, and just trust that the universe had different plans for us than the ones we had for ourselves. The same goes for Nat – had he not succeeded in getting access to Hidden Falls this summer, he would have at least known he had done everything possible. But he didn’t give up, he kept moving forward, and it paid off!

« To All the Working Moms
My Out-of-the-Box Life »