It’s hard to believe, but my baby boy (for those of you who don’t know, that’s my miniature poodle, Tucker) turned 13 last week! 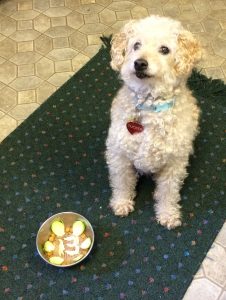 He is doing well, with the exception of a little arthritis, and a good deal of hearing loss. That’s actually a bonus, because if he doesn’t hear the doorbell ring, he doesn’t bark! But he still gets super excited at all sorts of things, runs around like a puppy, chases after his toys, and his appetite is as healthy as ever. I’m hopeful we’ve got quite a few more years together, and I’m reflecting on all that I’ve gained by having him in my life.

Here are five lessons I’ve learned from Tucker that are worth sharing:

#1 – Showing affection: Anyone who has ever had a dog knows that one of the best things about them is the greeting you get when you come home. You don’t even have to have been gone that long! But when you come back, they’re right there to greet you (or, in Tucker’s case, when I wake him up to let him know I’m home), wagging not just their tail but literally their whole body, jumping for joy, making “I’m sooooo happy to see you” noises, and of course going to find their favorite toy so they can finish the greeting properly. Maybe we humans don’t need to show affection quite the same way, but it feels really good when someone is happy to see us! A hug or even a smile can have the same warm result. I think we often don’t let people know that we’re happy to see them, because doing so makes us vulnerable. What if they don’t respond in kind? What if they don’t return the hug or the smile? We’re afraid we’ll end up feeling stupid or awkward. But dogs don’t worry about what others might think – they just know they’re happy to see us, and they let it show.

#2 – Being in the moment: Another wonderful thing about dogs is that they spend a lot more time in the present than we do. For example, a few months ago I took Tucker to the vet, and he was so uncooperative that he had to be muzzled. A week later we had to go back, and you’d think he’d be very hesitant. But, no! He was super excited. Why? Because the vet had treats! He wasn’t wasting any energy on the fact that she’d poked and prodded him in the past, and was probably going to do so again. He was just happy to be right where he was, getting treats. We humans, on the other hand, would have been worrying so much about what had happened to us in the past, or what might happen in the future, that we would miss that moment in the middle where we get treats (metaphorically speaking, of course). I think the main point to take away from Tucker is that there’s no good reason to let our worries and fears about something that isn’t happening right now, spoil something that is happening right now. Right? Here he is sleeping with his toy after a visit to the vet.

#3 – Thinking positively: Over the years Tucker has become a horrible beggar. He’s really bad – he sits and stares at whoever has food and whoever he thinks might be most susceptible to his charms. “Aren’t I cute?” his eyes say. “Wouldn’t you like to give me a piece of whatever delightful human food it is you’re eating?” I do my best to discourage him from begging, and my human friends from feeding him, but it works for him enough of the time that he keeps at it. In more than one situation, as I’ve watched him eagerly try to work his magic on an unsuspecting human, I’ve been struck by how optimistic he is. He always seems to believe that eventually, he’ll get what he wants. And enough of the time, he does! While the “power of positive thinking” is almost a cliché these days, I think there’s definitely some truth in it (and Tucker would agree). 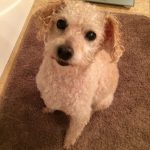 #4 – Taking action: Thinking positively is a great step, but it’s not enough. We also have to take action! Tucker doesn’t lie in the other room hoping someone will feed him. He very consciously places himself in the best location (where the people and the food are), sits up as straight as he can, and stares at people as longingly as he can. Lots of times we want things to be different, and we spend a lot of time thinking about it, but we don’t actually do what we need to do for things to change. Tucker doesn’t just dream about what he wants – he makes it happen. And we can, too.

#5 – Staying focused: Tucker also stays focused on his goals. One Thanksgiving, Tucker took up an attentive position in front of the buffet table. He stared intently at the turkey for at least an hour, until finally someone dropped a piece. Again, he was expecting the best (someone will drop a piece), and he had taken action to increase the odds of that happening (he was lying in front of the table with the food), but most importantly – he didn’t give up. He kept his focus on that bird, and he didn’t let himself get distracted by anything, or go back to lie in his bed where it was more comfortable. Now, when the temptations of modern life try to lure me away from what’s important, or things get challenging, I think of Tucker and his turkey! 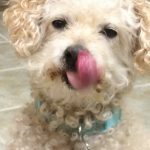 There are many more things about Tucker that are worth emulating, and also plenty that aren’t (rolling in disgusting smelly stuff, anyone?). But I’m so grateful for everything Tucker has taught me, and especially grateful for his affection, his presence, his optimism, his action, and his tenacity – and how he reminds me to do the same. If you’d like to bring more of these characteristics into your own life, Tucker wants to you to know that his mom could help! Just go to https://coachingheights.acuityscheduling.com/ to sign up for a free “What Would Tucker Do?” strategy session (okay, really it’s called a “Make a Leap” strategy session, but can’t you just imagine the WWTD bracelets)?

P.S. –While you’re at it, Tucker would also like you to please remind his mom to give him more treats.

« Where Do We Go From Here?
Community »