I worked a Voting Center in Northern California for three days leading up to the election, and on Election Day itself. I’ve thought about being a poll worker before, but never actually made it happen. This year, after hearing about a possible shortage due to more mature workers not wanting the exposure to the corona virus, I decided I would apply. 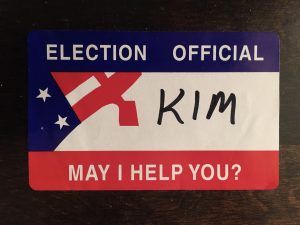 As it turned out, my county got lots of applications, which is reassuring – plenty of people care about our democracy. I only got assigned because I called the office to check on my status, and I’m glad I did. It was the perfect way to channel my energy during this election period. Long days, for sure – we started at 6am on Election Day and didn’t finish until a little after 9pm – but it was well worth it.

We helped lots of first-time voters, of all ages (the oldest I saw was 76!); saw lots of family members bringing in other family members to be sure they voted; helped quite a few blind or visually disabled folks vote using the accessible machines; and we even helped a few homeless people vote (conditionally, since they didn’t have an address, but they could vote that way)!

We weren’t the busiest polling place, as we were in downtown Sacramento surrounded by state agencies. Many of those workers are now working from home, so even during the week we weren’t as busy as the centers in the suburbs. And on the weekend – especially on October 31, Halloween, it was “deadly” quiet. But it picked up on Monday, and on Election Day we saw 3 or 4 times as many voters as we had even on Monday. In fact, county wide, more people voted on Election Day than had the entire 10 days of early voting!

What was interesting to me is that I think most of us poll workers were there because we cared about the election, and were concerned about it being fair. But we weren’t all on the same side of the political aisle. How is it that both sides are convinced the other side is going to try to steal it? This is the bigger question that we, as a nation, are going to have to tackle. Whether you’re a Democrat or a Republican or any other party or independent, most people, I believe, ultimately want similar things – a decent job, to be treated fairly, to feel valued and like their voice is heard, to be taken care of if they get sick, to feel a part of a community. 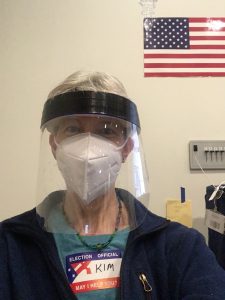 We have different ideas about how that should happen. But we have to find a way to come together on the things we do agree about. So in a strange way, I found it reassuring that my fellow poll workers and I were all wanting to keep our elections safe and fair, even if we were sure it was each other who was the problem. But really, it wasn’t each other. Sure, there are people – extremists, I would say – on each side who are pressing their advantage, and often treading into unethical if not illegal territory. But most people are trying to do the right thing, and do their civic duty. Surely we can build on that.

To me, all of this is tied to the quest to show up as our best selves. A never ending quest, to be sure, but the more frequently we are able to tap into the best version of ourselves, the more likely we are to be able to really listen and hear other people – and see the best in them. I think we can all use more of that.

And for fun – check out these great ballot cartoon characters that a fellow poll worker, Eben Burgoon drew! 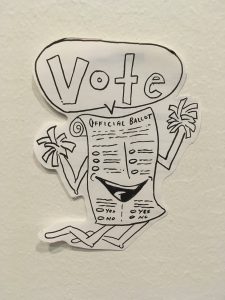 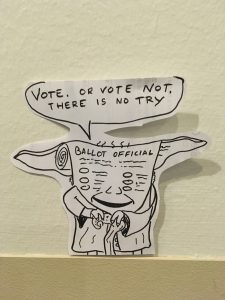 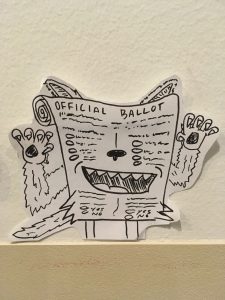 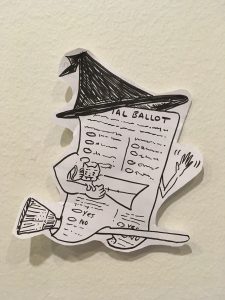