If you’ve been reading this newsletter for a while, you know that I had to put my beloved poodle, Tucker, to sleep this summer. We’d been together for 14 years, and as you can imagine, I miss him dearly.

The big question is, when am I going to get a new dog? Well, I almost got a puppy a couple of months ago – but then I didn’t. 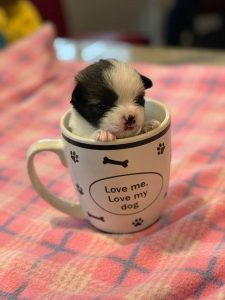 Yes, that’s her in the coffee mug at about 2 weeks old. I know, you’re probably thinking – why on earth would I not keep that adorable puppy?!?

Ultimately, the answer came down to trusting myself. Doesn’t it always?

I first met the puppy when my housemate fostered her for a weekend – and I didn’t give her a second glance. To be honest, when they’re really little, neither kittens or puppies are at their cutest – they look remarkably like rats. And, Suna bottle feeds so many little ones for her rescue organization that I tend to not pay them much attention.

Two days later, I happened to be home when Suna was returning the puppy to Andrea (Andrea fosters all the puppies for the rescue, but had been out of town so Suna was helping out). Again, I didn’t give her a second look. That is, until Andrea started saying that they thought she might be a Shih-Tzu puppy. Then my ears perked up! I need to have a small dog, and my family even used to have a Shih-Tzu. Not to mention that Suna and Andrea were both in love with her, saying she was an incredibly sweet dog.

Later that evening, I asked Suna what she thought about me keeping the puppy, and she was very excited about the idea. So I called Andrea to ask if the puppy was spoken for, and she said no – she could be mine!

I convinced Andrea to let Suna and me take care of the puppy for a few days. Suna did the bottle feeding for the first couple of nights, and on the third night I took over. I was a little afraid to bottle feed her, but the puppy and I survived, although I hardly got anything done while she was here. I was thinking about where she would sleep, and how I would rearrange my schedule to take care of her, and looking up puppy training websites. 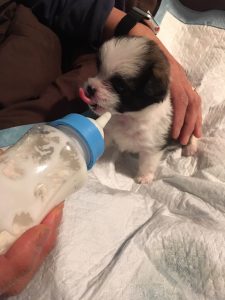 But all this time, I was feeling uneasy. I had this gnawing feeling that the puppy wasn’t the right dog for me, even though so many things seemed perfect. I’d know almost her entire life history, my housemate was totally on board, and I’d just recently told Tucker I was ready for him to send me another dog.

However, it was feeling a lot like the decision I’d made a month earlier between buying the white Prius or the green Prius, before I’d gotten clear that I didn’t want the white Prius.

What was making me question this decision?

Well first of all, she was a puppy. Which means a ton of work. I have never housebroken a puppy (Tucker came to me at 5 ½ months, already housebroken and knowing a few commands).

And, she had a dark colored “mask” around her eyes, which made them hard to see. I realized that I loved being able to see Tucker’s eyes, which stood out against his apricot coloring. I didn’t want to admit that I felt that way, because it was so shallow, but – there it was! I had to admit it, because it was true for me.

But most of all, I wanted to feel about my next dog the way that I felt about Tucker – and the way I felt about the green Prius. Excited to start this new adventure! Not uneasy!

When I got Tucker, I had been searching for a dog for about a month. I looked at the local humane society’s website one afternoon, and saw that there was a miniature poodle listed – no picture, but that was enough for me to call and put down my $10 deposit to have first dibs on him.

Later that evening, they put up a picture of Tucker, and I literally couldn’t sleep that night. I was so sure – I don’t know how, but I just was – that I was going to meet my dog the next morning. And, I did! Without a doubt, he was meant to be my dog. I took him home, marveling at how adorable he was. Throughout our whole 14 years, even when he was doing really annoying things like howling or rolling in poop, I never stopped feeling that way. And it bothered me that I hadn’t felt that way about this puppy. 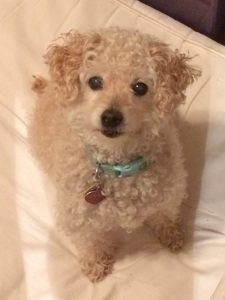 Maybe it’s a lot to ask, but I want to be all in with my next dog. I want to know on that deep-down level, the same way I did with Tucker, that this is my dog. And the reality is, I didn’t feel that way about this puppy.

So, I told Andrea that I wouldn’t take the puppy after all, and she should find her another home. Which, she has – a friend of the rescue is going to adopt her, and it looks like it will be a perfect situation.

I think the key learning for me is that I let myself get swayed by what other people thought – in this case, the fact that both Suna and Andrea were in love with the puppy. And they weren’t wrong to be in love with the puppy! She’s adorable! But I was letting myself get swept along by other people’s enthusiasm, just as I had with the white Prius. I let their excitement cloud what I truly felt. And then, I spent a lot of time and energy trying to convince myself that what I felt wasn’t actually true.

Unlike when I was buying my car, there was no perfect dog waiting around the corner. I still haven’t met my next dog yet, so by passing on this puppy I’m probably not likely to get a dog until next year, given my travel schedule. And sometimes, you have to say no to a really good thing, because it’s just not right. Even if you don’t know when – or if – you’ll find the right thing.

This made me think of some of my coaching clients, who find themselves in jobs that aren’t so bad, but aren’t quite right, either. Walking away from those, especially when they don’t know what they’re heading for, can be very scary. For some of my clients, taking that leap of trust – “I’m going to leave this job so that I can find my way to one that is right for me, even though I don’t know what it is!” – is what they feel called to do. And I admire their bravery! Not everyone can – or should – do that. But sometimes, that’s what opens up the space for new possibilities to show up.

So, I’m going to trust that listening to my gut and not adopting this puppy is going to ultimately open up the space for Tucker to send me the perfect dog. Just like I trust that when my clients are brave enough to take that leap, things will open up for them that they couldn’t have even imagined. And in the meantime, I’ll enjoy the perks that come with not being a dog owner, like not having to rush home to let the dog out! 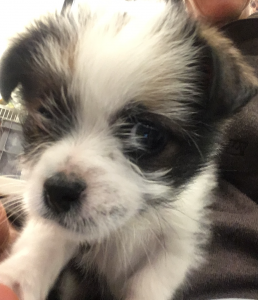 I’ve been to visit the puppy a couple of times since, just to see how big she’s getting. I’m happy to report that she is still ridiculously adorable, although she’s looking much more like a terrier these days than a Shih-Tzu. Despite her cuteness, my visits have confirmed that I made the right call. No regrets!

« Decision-Making, Intuition, and a Green Prius
May the Fourth be with you! Happy Star Wars Day! »