Do you go to work full of excitement and enthusiasm each day, hardly able to believe that you’re getting paid to do it?

If you’re like most people, the answer to this question is probably no. In fact, I wouldn’t be surprised if you scoffed when you read that, it’s so unlikely. But I bet if you think about it, you probably know someone who seems to fit that image. Someone who clearly is doing what they are drawn to do; who has found their calling.

Have you ever had the feeling that you were absolutely, without a doubt, meant to do something? I’ve had it happen twice in my life. The first time I was 16 years old. I was fascinated with foreign languages and dreamed of going to a foreign country, but I needed a scholarship to make it happen. After a couple of unsuccessful applications, I read in the school bulletin about an all-expenses paid summer program in Japan. Almost as soon as I saw the announcement, I knew that’s what I was going to do. I sent off my application, participated in the interviews – but all of that was just a formality. Even now it’s hard to explain, but deep down I knew that I was going to get one of the two scholarships available in my state. I had never been surer of anything in my life. And my 16-year-old self was not mistaken. 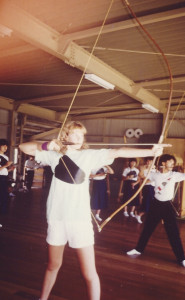 That summer in Japan changed my life in so many ways that it’s hard to imagine where I would be now if, say, I’d ended up in Europe my junior year instead of Japan. Most notably, it’s what got me into teaching, and that’s what got me into grad school. Although I don’t have many opportunities these days to speak Japanese, except with my dear friend Mrs. Sakakura (my first Japanese teacher), that experience has helped make me who I am.

I said I’d had that feeling of absolute certainty about my path twice. I had actually begun to wonder if I would ever feel so sure about something again, as I moved from one job to the next. I was always jealous of my sister, who knew early on that she wanted to be a health professional, and kept on hammering away until she became a Physician Assistant. Me, on the other hand…there are so many things out there to do, how could I possibly figure out which one was right? And then, about a year and a half ago, it happened again. I was reading about a coaching course opportunity in a newsletter I had joined when in grad school. They often mentioned coaching courses, and I had always thought it sounded interesting, but it had never been the right time. In May of 2013, though, it was different. When I read about it, I knew – again, I knew beyond a doubt – that I was going to be in that class. And it felt so right, so certain, because it is what I’m meant to do right now.

Of course, there’s still plenty for me to learn about coaching, and it isn’t the only thing in my life. I have a lot of things I love, and a lot of things that are just fine, and some things that I wish were different. But it’s so nice to have something that resonates with my soul. Just the thought of it makes me happy! Can you imagine how different the world would be if we were all doing more of what we are meant to do? If you want to get closer to what that is for you, I’d love to help. And coaching is the perfect way to start!

« Procrastinate? Who, Me?
Conjuring Up Memories »