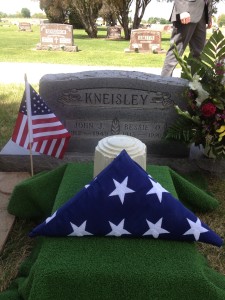 Over Memorial Day weekend, Suna and I flew to Chicago so that we could attend a graveside memorial service for her father, John Kneisley. While there had been a funeral mass held in Riverside right after his death, this ceremony was held in his hometown of Kouts, Indiana, with military honors (he served in Korea during the Vietnam War).

It was a beautiful day, and people from many stages of John’s life came for the occasion: his cousin and her husband flew out from D.C., his 90-year-old uncle and his wife drove out from Kansas City, his best friend from college, his boss from two universities, two new friends he’d met since he moved to California, a classmate who still lived down the same road in Kouts where she had grown up.

The bustling metropolis of Kouts currently boasts a population of just under 2,000 people; more than double what it was in the 1950’s, when John was a young boy. After the ceremony and the reception, Suna’s Uncle Bill and Aunt Terri drove us around their old neighborhood, showing us the farm Suna’s grandfather had worked after his factory shifts, the house her dad had grown up in, and her grandma’s house.

The current occupant of Grandma Bessie’s house was home, and he gladly let us wander inside. Suna walked around the house with him, telling him how her grandma used each room, while he pointed out the changes and upgrades he had made…lacquering the insides of the cabinets and drawers, moving a closet. He pointed out the frame around the door into the kitchen, on which Suna’s grandma had marked the changing heights of her and her brother. He even offered to rip it out so she could take it home!

After our visit to the neighborhood, we went back to the bar on the corner of the main (only?) intersection in town. We drank a beer in memory of her dad with his California friends Ed & T.C., her Uncle Mike and Aunt Rita, and her Aunt Kim and Uncle Jim. Probably the highlight of the trip for both Suna and myself was getting to spend time with her aunts and uncles. Hearing their stories of growing up in Kouts, their memories of her father and grandmother, the good times and the bad times – it was all priceless.

And yet, technically they’re not really her aunts and uncles. Suna’s father didn’t have any siblings, but he and the three Hefron kids down the street (Mike, Bill, & Kim) spent so much time together growing up they might as well have been. Just another reminder that family doesn’t have to be blood. It’s wonderful when families are close to each other, and I count myself very lucky to be as close as I am to my parents and my siblings—but it doesn’t always work out that way. The family we choose can be just as important to us as the ones we are related to by blood. For that matter, Suna and her dad may not have been biologically related (he adopted her when he married her mom), but really, who cares? He was her dad. He raised her, cared for her, didn’t always do the right thing but always tried to do his best for her, and was the most consistent family member in her life, especially in recent years. Family takes many forms – cherish them, however they come to you!

“I’ve learned that regardless of your relationship with your parents, you’ll miss them when they’re gone from your life.” – Maya Angelou

“I sustain myself with the love of family.” – Maya Angelou

“The bond that links your true family is not one of blood, but of respect and joy in each other’s life.” – Richard Bach

« Why Do Babies Smile?
Procrastinate? Who, Me? »