This story came into my inbox the other day, and I wanted to share it with you (it’s from Marc and Angel Chernoff’s Hack Life blog, which I highly recommend).

So here’s what happened: a client of theirs had run into the grocery store in the morning to pick up two small items. As this man walked to the front of the store, he saw there was only one checkout line open, and there was a woman with a huge cart of groceries and a baby ahead of him. He sighed and got in line, with a sinking feeling that what should have been a quick errand was now going to take much longer.

He got more and more frustrated as the woman and the cashier began chatting, and oohing and aahing over the baby, seemingly unaware that he was also waiting. As he was just about to blow up, he remembered to take a deep breath. He thought to himself, “This isn’t the end of the world. It’s not ideal, but it isn’t the end of the world. And, that baby is actually really cute.” And as he switched his focus to those thoughts, the cashier finished ringing the woman up, and soon she and the baby and all the groceries were on their way. 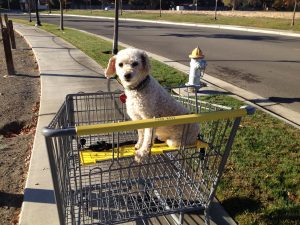 My picture of a “baby” in a grocery cart!

When he got up to the cashier, he commented, “That baby was really adorable, wasn’t she?” The cashier said, “Thank you, sir.” Then she went on to say, “That’s actually my baby. You see, my husband was killed in Afghanistan, and my sister watches her a few days a week so that I can work here to make ends meet.”

When he heard that, he was so glad that he had remembered to take that deep breath, and consciously shift his focus. As a veteran himself, the last thing he would have wanted to do was disrespect a military family – or any family trying to get by, for that matter.

I love this story because it’s such a powerful reminder of how we ultimately are the ones that determine the experiences we have in life. It would have been very easy for that man to just let his frustrations get the better of him, and whether he blew up at the cashier and the woman with the baby or not, he certainly wouldn’t have done himself any favors – he would have started his morning off in a bad mood, and it likely would have impacted other interactions he had throughout the day.

But, he took the time to check in, to be present, to see what was true about the situation – or more importantly, what he wanted to be true about the situation. Both perspectives could be accurate – that the woman ahead of him was taking too much time and he had a right to be angry and frustrated, or that even though he wished they were moving faster, it wasn’t the end of the world and it gave him the opportunity to appreciate a happy baby.

The important thing is that the choice of how to react was his – it wasn’t up to anyone else, and it was completely in his control.

Marc and Angel frequently say that our mind is our biggest battlefield, and I couldn’t agree more. But while this is both daunting, because it often seems that our minds have a mind of their own (lol!), it’s also reassuring, because with practice, we can get better and better at choosing our perspective rather than just reacting to situations. It puts us back in the driver’s seat, and it’s hugely powerful.

This is what we focused on at the start of my Make Your Job Better group coaching program a couple of weeks ago – choosing the mindset that moves you forward. It’s one of those things that is so simple, yet can be so hard, and is so important to how we experience our jobs and our work lives. And of course, it carries over to all aspects of our lives.

As we move into the busy holiday season, with all of its potential frustrations and things to react to, I hope this story helps you remember that you always have the power to take a deep breath and choose a different perspective.

To watch a video of Marc telling the story and sharing more about what it means, click here (4 minutes).