At my family’s Christmas Day dinner this year, we were joined by my brother-in-law’s brother-in-law (is there an official term for that? I don’t think so!), who is a truck driver and happened to be in the area. I was fascinated by Niko’s story, and most of all by his obvious enthusiasm for his job. 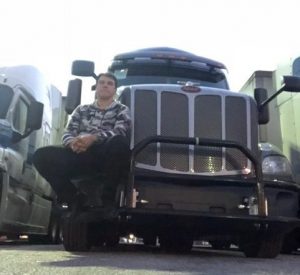 He’s a Bosnian Serb, and spent much of his high school years living without electricity or heat in his war-torn country. He has always wanted to be a truck driver – as a child he had one toy car, and the rest were all toy trucks. He wanted to go right into truck driving after high school, but his parents insisted he go to college. They were hoping that he would get interested in another career track (something more “prestigious,” perhaps?).

But his dream of becoming a truck driver in the United States never wavered. When he received his degree, he took his diploma to his parents, presented it to them, and said, “Now can I drive trucks?” To his parents’ credit, they recognized that no matter how much they might want him to do something else, he wanted to drive trucks – always had, and always would. So they didn’t stand in his way.

Now, he’s achieved his dream – he’s been in the States at least two years, after spending some time in British Columbia. He loves driving, he loves his truck, he loves getting to go all over the country, he loves the adventure of not knowing where he’s going to be sent until he picks up his load, he loves looking out the window of his cab in the mornings and seeing whatever view of nature he has, and all of that enthusiasm literally radiates off of him.

I always admire people who not only know what it is they want to do, but don’t give in to pressure just because those around them – especially the people who love them the most, and no matter how well-intentioned – believe they should do something else. In fact, my dad chose law in large part because he thought it would make his parents proud, and not because it was something he was naturally good at or even really wanted to do. And he paid the price – and so did we.

Regardless of whether or not we’re as clear about what we want to do as Niko, we often allow ourselves to be convinced to do things because they’re practical, or because we think we have to live up to someone else’s expectations. But in my experience, that always backfires at some point. If you really want to do something (or know you really don’t want to do something), that’s your intuition pointing you in the direction you need to go. And we’re always better off listening to it.

This is an especially good time of year to listen to that little voice inside of us, especially if it’s telling us that something in our lives or work isn’t quite right, and even if we don’t know what it is that we want. Because when we start taking steps towards something new, regardless of whether or not we know what it is, paths and possibilities will open up that we never could have imagined.

Start taking those steps through one of my two holiday coaching specials. Don’t delay! They’re only available through December 31st, 2018.

« A Story About Perspective
Decision-Making, Intuition, and a Green Prius »