Okay, so I totally stole the title of this Summit Register from a recent post by Seth Godin, which I loved. In fact, here it is in its entirety (emphasis added): 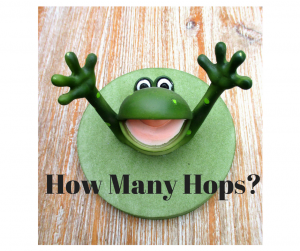 Some things, like your next job, might happen as the direct result of one meeting. Here I am, here’s my resume, okay, you’re hired. But most of the time, that’s not the way it works. You meet someone. You do a small project. You write an article. It leads to another meeting. You do a slightly bigger project for someone else. You make a short film. That leads to a speaking gig. Which leads to a consulting contract. And then you get the gig.

How many hops does the ball take before it lands where you’re hoping it will? If you’re walking around with a quid pro quo mindset, giving only enough to get what you need right now, and walking away from anyone or anything that isn’t the destination—not only are you eliminating all the possible multi-hop options, you’re probably not having as much as fun or contributing as much as you could either.

Why do I love this so much? Because it speaks to how wonderful it can be when we don’t worry about how we’re going to get to a goal, but rather open ourselves up to wherever the journey takes us. And the journey can often take us to places that we never even knew were possibilities (and wouldn’t have known, if we’d stuck only to the path we envisioned for ourselves). For example, if you’d told me that I’d end up teaching Japanese, getting a PhD in educational psychology, spending my summers in the Tetons, and starting my own coaching business, I would never have believed it. But, here I am! And it all started with some random hops into things that interested me, like studying abroad in Japan in high school.

“How Many Hops” also made me think about how sometimes we get stuck because we’re quite sure that we a) know all the paths that are open to us, and b) know where those paths will lead. But the reality is, we never know for sure where any path can lead, even if we think we can see it clearly. There are usually bends and alcoves and other paths that only become clear to us once we start walking. And sometimes we can be completely blind to paths that are right in front of us. Have you heard of the visual perception exercise that asks people to count the number of times the players wearing white shirts bounce the ball to each other (as opposed to the players in black shirts)? What happens is that people get so focused on the players in the white shirts, that they literally do not see the person in a gorilla suit walking through the middle, pounding her chest. This same thing can happen to us when we get so focused on the path we’re on that we literally cannot see the other paths that are open to us. Sometimes, the best thing we can do is to find someone who can help point them out to us.

We can also spend a lot of time and energy wondering and worrying about which path to take, when we don’t yet have enough information to make an informed decision. Again, often what we need is the encouragement to take that first step down one of the paths. It doesn’t matter which one, but as soon as we start down it, we get information that is hugely valuable and that can help us make an informed decision, instead of just worrying and hesitating. That path might be a dead-end, and that’s fine. At least we know! Or, it might lead to something else we’d never thought of. I worked with a client who was wanting to become a teacher. Through our work together he ended up finding a job at a maker museum, which involved teaching kids how to build things. It was a great combination of many of his skills and experiences (he had a background in construction), and I, for one, hadn’t even heard of a maker museum when we started. But the hops he made led him to it. And that’s the beauty of it – you have to get out there and try things, or you won’t know what works – or where you’ll end up!

All of this seems very appropriate, given that we’re a week past the Easter holiday, with its plethora of Peeps and bunny rabbits and other things that hop, and heading into spring. Here’s to embracing the idea of “multi-hops” in our lives, and seeing where they lead us! And if you or someone you know could use some encouragement, I do hope you’ll reach out!