I received this powerful story about Chloe the pit bull from Braver Angels a few days ago. Braver Angels is one of the organizations I’m donating to for everyone who signs up for the Optimize Mastery/Coach program using my link before the deadline, which is at 11:59pm PT on Sat, January 15th, 2022: https://kim7–heroicenterprises.thrivecart.com/optimize-mastery/

The Optimize Mastery/Coach program is all recorded so even if you can’t start right away, you could catch up later. And if you don’t want to do the whole program you can always sign up for the free Optimize Premium. https://www.optimize.me/?affiliate=kim7

But what I really want to share is this story from Randy Lioz, Braver Angels Director of Events, about Chloe the pit bull and what we can learn from her…I think he makes some very astute observations. 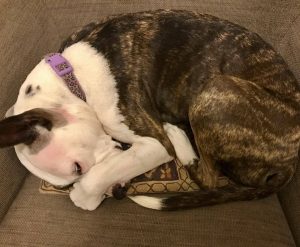 “I (Randy Lioz, Braver Angels Director of Events) met Chloe on my Tour D’Angels last year, visiting BA colleagues in the southeast I’d known only through a Zoom screen. A muscular pit-boxer mix who lives with Jack and Lorry Denniston in Chapel Hill, NC, she could probably go toe-to-toe with a UFC fighter.

When I showed up, Chloe was a bit excited and barky. But I greeted her confidently—as a dog owner I could read her mood and intent, and it was clear that Chloe has a distinct soft spot for us humans.

She’s a sweetheart who likes to play a little rough. Join her in a bout of tug-of-war and she can keep a grip on a rubber ring that leaves little doubt of the damage she could do if her jaws were ever turned against you in anger, though that’s hard to even imagine with Chloe. (That being said, I acknowledge the debate over the potential dangers of owning pit bulls and pit mixes, and my own feelings are complex and evolving.) When she did give my hand—or arm—a gnaw, it didn’t hurt. She was exploring her environment, being affectionate and interactive.

Still, I can picture a dog newbie being terrified to meet Chloe. And that’s an interesting illustration, I’ve realized, of some of the principles we focus on at Braver Angels.

We encourage people to avoid demonizing or dehumanizing others. While the latter is only relevant with actual humans, the former is universal. When our sense of hatred, fear, or contempt towards someone, even a dog, makes us believe that they have evil intent—that they might hurt us just for the sake of doing so—we can become capable of hurting them back in ways that seem justifiable.

This can be a downward spiral. Recent research has put some data to the conventional wisdom that dogs can sense fear and may react aggressively. A 2018 University of Liverpool study was the first to measure the personality types of dog bite victims, concluding that people with traits of neuroticism—like fear, anxiety and generally negative emotions—have a higher likelihood of being bitten.

Even beyond the pheromones associated with our emotional states, dogs are highly sensitive to our body language and other behaviors. So it makes sense that fearful reactions like sudden movements and defensive postures can trigger a dog’s own defenses, with dangerous consequences.

This spiral can be just as scary between humans. We’ve seen what happens when two groups who increasingly fear one another become locked in a cycle of recrimination that seems to justify extreme reactions. The polling bears this out, with 60 percent of partisans in one study viewing the other side as a threat to the country, 40 percent going further and believing their opponents are evil, and 20 percent even seeing them as less fully human.

Last year a group of conservatives who felt demonized as “deplorables” by the left—believing Democrats will stop at nothing to control the levers of government—tried to take matters into their own hands, storming the U.S. Capitol. Progressive activists, believing that Republicans are undermining democracy and targeting already-vulnerable groups, have sought to silence their opposition, driving them into spaces where their fears are only confirmed.

I’ve been frustrated by a complete loss of good faith on the part of many partisans who embrace the view that those who disagree with them seek to hurt the country. They accept the cognitive fallacy that the extreme behaviors of others follow from this malign intent, while their own behaviors are simply a rational reaction to an existential threat. I share concerns with Democrats about the threat to our democracy, but I also hold deep concerns about some of their reactions.

My own dog, Ferry, sometimes gets a bit toothy when I feed him treats along our walks, with uncomfortable finger chomps. To ease this behavior, I leave my fingers in there longer, rather than pulling away quickly in fear. In a political context, I think we’d greatly benefit from assuming good faith among our adversaries, which allows us to slow our reactions and examine the nature and sources of our fears.

My time with Braver Angels has shown me that those fears are often shared. In a world of limited resources, we all fear loss. In a pluralistic society with ever-changing norms, many of us fear damage to our reputation if we run afoul of norms we don’t understand.

Pausing to listen to another’s concerns and fears isn’t an endorsement of their beliefs. But it does help us to build good faith—to acknowledge our shared humanity and that we’re subject to the same mistakes, misinterpretations, and overreactions to our fears. It helps us to break that cycle of recrimination, and respond in a way that won’t simply reinforce the fears that keep the cycle going.

Whether it’s Chloe and me or Reds and Blues, that good faith can help build stronger relationships and lead to more enjoyable bouts of tug-of-war—whether we’re wrestling over something as silly as a dog toy or as personal and important as an issue we all care about.”

« The Program That Changed My Life
There Are Good People Everywhere »