I’m just going to put it all out there. I’m White, racist and I’m fully taking advantage of my unearned privilege. How? Well, for starters, there are things I don’t have to think about on a regular basis. I was horrified when George Floyd was murdered, and I went to protests, made donations, and read and watched and listened to Black voices. And then, I got busy. Busy getting ready to lead my online coaching group. Busy prepping for and teaching Interpersonal Skills classes. Busy getting ready to go to the Tetons. Busy with my life.

And that, right there, smacks of privilege. Because my life doesn’t include having to worry about being stopped by the cops for no reason. It doesn’t include having to endure countless slights or micro-aggressions because of the color of my skin. It doesn’t include hearing about yet another Black man or woman killed by police and thinking, “That could have been me,” or “That could have been my son, or my brother, or my father.” I have the privilege to not think about Black Lives Matter, or police brutality, or racism, or any of that if I don’t want to. In fact, unless I make an effort or something terrible happens that makes the news, I probably won’t.

But what I know deep down, even if part of me doesn’t want to admit it because it means I need to take responsibility – is that not getting involved because I’m busy, or it doesn’t affect me, or I don’t want to get into politics, or I’m not sure of the right thing to say or do – whatever the excuse, it isn’t valid.

When Martin Luther King Jr. said, “History will have to record that the greatest tragedy of this period of social transition was not the strident clamor of the bad people, but the appalling silence of the good people” – he was talking about me. He was talking about now.*

I’m writing this because making this admission not only to myself, but publicly, is a first step. And only a first step. It doesn’t absolve me of taking further action. It doesn’t mean I’ve done my “good White person” thing and now I can sit back on my laurels. Far from it. And to be honest, I’m terrified that despite writing this, I will sit back. I like my unearned privilege. Why wouldn’t I? It’s comfortable, it’s easy, and I don’t have to do anything to get it.

But if the entrenched racism that is everywhere in our society is going to change, then I have to act. I have to get uncomfortable. I have to re-educate myself. I have to take risks, similar to those that many of my fellow Americans are taking every day just by virtue of who they are. Perhaps some of you don’t see any reason to change the system, and others of you may have been taking action for years. But if you are also scared that you’re not doing enough, or that it will be too easy to go back to life as usual – I hope you’ll take a step, too.

Any step in the direction of equality is worth taking, and everyone’s will be different. If you are not sure where to start, I recommend Peggy McIntosh’s essay, “White Privilege: Unpacking The Invisible Knapsack.” It’s not new, but it is a powerful reminder of the benefits skin color bestows on us (or not). And because this is only the first step of many, you can expect to see more resources and soul-searching from me in future Summit Registers. 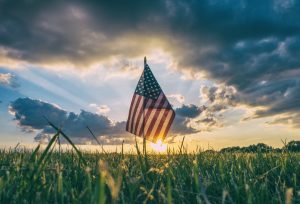 One last thought as we approach July 4th – as Americans, if we truly believe in the Declaration of Independence’s second paragraph, then we are called to stand up and speak out and use whatever privilege we have: “We hold these truths to be self-evident, that all men are created equal, that they are endowed by their Creator with certain unalienable Rights, that among these are Life, Liberty and the pursuit of Happiness.”

As Ryan Holiday of the Daily Stoic says, “We can commit injustices by doing nothing, too. When we try to tell ourselves that this is not our fight, that this is not our problem, that someone else is more equipped to get involved than we are – that’s what we are doing. We are not just allowing injustice to continue, we are committing a new injustice by abandoning fellow citizens or fellow humans who are asking for our help.”

Our friends, neighbors, colleagues, fellow citizens, and fellow humans are asking for our help. The easy path, the path of least resistance, is to be “appallingly silent,” but I’m challenging myself – and all of us – to answer the call.

*Thanks to Anne H. for recently reminding me of this powerful MLK Jr. quote.